The Gurney For President Campaign, by Editor-in-Chief David E. Davis Jr. - Car and Driver Magazine, May 1964.

Dan Gurney For President! Car and Driver's Candidate for This Great and Honored Post!

As we sit in our office watching the parade of poltroons, charlatans, earnest amateurs and fuzzy idealists that constitutes the current assortment of presidential aspirants, we rebel. We will not let the major political parties lead us down the garden path again this year. We'll run our own candidate, a man who can represent each of us who counts himself a car nut.

Enthusiasts Unite! Join with us in supporting the candidacy of Dan Gurney, running on a platform of unbridled automotive enthusiasm. Neither the Republicans nor the Democrats have taken any interest in the keen drivers' needs, hopes, desires, or innermost dreams, so we say the hell with them! We'll create a third stream—a vital new force in American politics that will sweep old ladies and small town speed traps from the highways and restrict winding two-lane roads to drivers of proved enthusiasm and skill. All drivers will have to pass through something like Carroll Shelby's school at Riverside, or one of the good English or European driving schools—the failures to be banished to public transportation. This will serve the dual function of improving local and state revenues, making railroads, airlines and local surface transportation companies solvent again, and clearing the jerks off the roads so that we paragons of impeccable, high-speed driving can have our way.

Who could possibly be better suited to champion our cause than Daniel Sexton Gurney? He goes like the wind. He can drive anything better than most anybody. He has the enduring love of 300,000 fans at Indianapolis. His name inspires countless stock car partisans in the Southeast. He is the patron saint, of American sports car racing. European GP aficionados speak his name in the most reverent tones imaginable. He has become a legend in his own time.

Look at him from a purely political, non-automotive standpoint. Say his name aloud. Daniel Sexton Gurney. President Daniel Sexton Gurney. What a sound—as though he was preordained to take the job. Dictionaries variously define his given name as "An Exemplary Judge," or "God has judged." Even if those definitions were not so reassuring, we have to but point to Daniel in the Lion's Den, or Daniel Boone, for further inspiration. His middle name, Sexton, brings to mind selfless men laboring in little country churches, working night and day for the benefit of their friends and neighbors—significance that will not be lost upon the fundamentalist rural electorate. Then Gurney—a solid Anglo-Saxon name borne with pride by countless generations of soldiers and men of the soil, merchants and artisans, the very stuff of which America was formed.

Daniel Sexton Gurney! The name that shall be a rallying cry for thousands of disenfranchised enthusiasts! 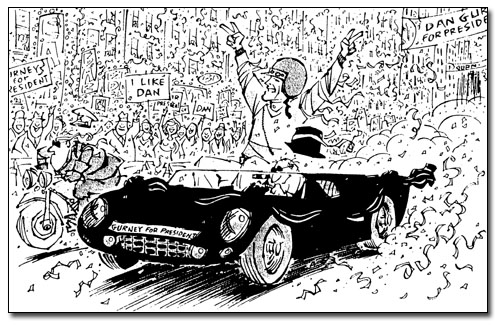